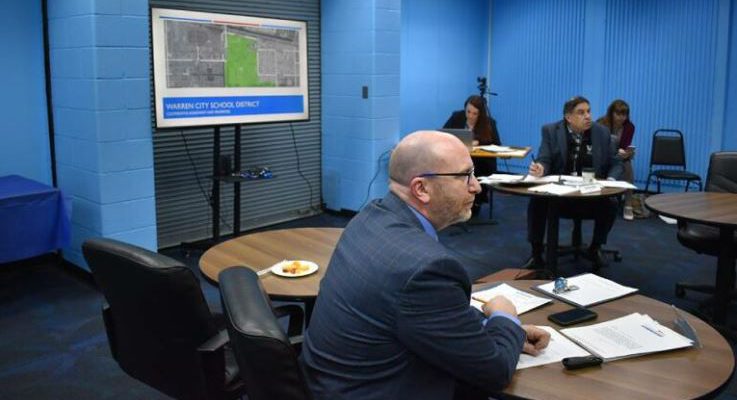 WRPA’s board of directors voted Wednesday morning on several agreements to accept a total of just over 81 acres off West Market Street from the city of Warren and the Warren City School District for the potential project.

The board approved entering into an agreement to acquire 94 parcels totaling just over 48 acres from the city under its recently renewed cooperative agreement with the city during its monthly meeting, held at Youngstown-Warren Regional Airport. The property includes the now-vacant site of the former Westlawn apartments.

The board also entered into a separate property transfer agreement, modeled on its existing agreements with Warren and Youngstown, with the Warren school district as well as a resolution to acquire another five parcels totaling just over 33 acres adjacent to the property it is acquiring from the city.

Both transactions with the school district must also be approved by the school board, and all 99 parcels will be purchased from the city and school district for their appraised value, said Anthony Trevena, port authority executive director.

“We’re not at liberty at this time to discuss the end developer,” but city officials “want us to be able to tee up the ability to receive these parcels that will then be sold to an end user for the creation of jobs,” he said. The company is looking at a groundbreaking as soon as spring, he said.

“The developer is ready to start as soon as we’re able to get the properties transferred,” Keys said.

The agreements were among several property-related items the WRPA board acted on during the meeting, including the execution of final lease documents with Clean Energy Future Trumbull LLC for the Trumbull Energy Center project in Lordstown.

Clean Energy Future Trumbull is constructing a natural gas-fueled combined-cycle energy plant on land next to a similar-size operation called the Lordstown Energy Center, which Clean Energy Future LLC helped develop in 2018. The entity closed on financing for the $1.2 billion project and on the site for the project last year.

The agreement approved Wednesday includes authorizing execution and delivery of a ground lease agreement and construction manager at risk agreement, as well as issuance of a sales tax exemption certificate.

Additionally, the board approved agreements to acquire a building and land at 900 Pine Ave. SE in Warren from North Park Properties for $100,000, and 22.87 acres of land at 1979 Youngstown-Kingsville Road in Vienna from James and Nancy Alderman for $205,830.

The Warren property is adjacent to the former BDM Steel site, which the port authority acquired last year and is marketing for potential development.

“We just don’t want this to end up in hands that would not necessarily fit with what our future plans are,” Trevena said.

WRPA purchased the Vienna property for a possible public access park that would showcase the history of the Youngstown Air Reserve Station. Features could include models of the aircraft that have been based at the airbase throughout its history and potentially an observation deck, said Col. Jeff Van Dootingh, commander of the 910th Airlift Wing.

The port authority received $500,000 in state capital funds for the project, Trevena said.

At the beginning of the meeting, the board voted unanimously to retain its current slate of officers, headed by Loney as chairman, Sam Covelli as vice chairman and Rich Edwards as secretary.

All three have served in their respective roles since 2017.

“Everything seems to be going so smooth right now with the leadership that we have,” said Covelli, who chairs the economic development committee. “I don’t think this is the time to change anything.”

Additionally, Edwards will continue to chair the aviation committee, and Kathleen Kennedy will chair the finance committee.